You are here: Home / Game Room / Best RPG Board Games – Take Your Game Night To the Next Level!
FYI, TheGameRoomReview.com is "reader-supported", meaning that when you buy through links on this site, I may earn a small commission (at no extra cost to you). Note that this does not affect which product(s) I include in the article as the product(s) are selected based on their quality and reputation regardless of the affiliate relationship.

RPGs (role playing games) are fun regardless of the medium. They are intricate, and typically take long enough to complete that you get to fully dive into the culture of your game and bond with your fellow players. RPGs have never been as popular as they are today. If you love RPGs then you would love these best RPG board games we will be presenting to you today.

In this post, we’ll first go over our top picks for the best RPG board games.  From there, we’ll dive into a few tips and things to consider for those of you who are new to the world of RPG board games.

In a Rush?  Here’s Our Top Picks

Reviews Of The Best RPG Board Games

#1 on our list is Gloomhaven. This impressive game features a large epic world immersed in adventures and fun. Since the game offers 95 scenarios, it would take you and your friends over 100 hours to finish. Gloomhaven is based on teamwork, as such, you and the other players will need to work together as you explore dungeons and ancient ruins. As with a good RPG, your skills and abilities improve throughout the game.

The objectives of the game include completing campaigns and scenarios as well as completing personal quests. These heroic quests take individual players on adventures parallel to the main storyline. The game has two main areas – the Gloomhaven city and the scenario area. While the players have to battle through dungeons and ruins in the scenario area, they can level up, manage their party, trade items and many more in the Gloomhaven city.

The unique combat system of this game ensures that play requires strategy, but at the same time, combat is simple. We can go further into the rules, but why don’t you check it out now yourself?

This multiplayer RPG game pitches a band of heroes against the treacherous overlord. Up to 4 heroes can band together to stop the treacherous overlord from carrying out his nefarious plots. Although the overlord is usually a human player, the companion app (which can be downloaded from Google Play and App Store) can assume the role of the overlord.

The overlord controls monsters and uses an arsenal of devastating powers to destroy the heroes. The heroes, on the other hand, embark on heroic quests through dungeons, forests, and ancient ruins while fighting off monsters as they attempt to stop the overlord.

This game is story-driven and the world and components are rich in detail. Each game lasts for 1 to 2 hours and allows players to fully engage themselves in the world created which is based in the fantasy realm of terrinoth, the setting of runewars, rune age, and runebound.

Dark Souls: The Board Game

Anyone who is into RPG has heard of Dark Souls. This board game is designed on the same foundation as the video game series is. As such, it is very challenging. You start by selecting one of the four character classes available. Each character class has their strengths and weaknesses.

Surprisingly, this board game can simulate the feel of the video game series very well. Gameplay should be tough enough to satisfy hardcore gamers while accessible enough for first-timers. Players need to study and master enemy moves, and behavior as well as their strategy in every battle and location. The game can be played alone or with up to 4 players.

As a challenging game, the Dark Souls board game is best suited for players who want a challenge.

If you want a board game set in a long time ago, in a galaxy far far away, then you need to pick up the Star Wars: Imperial Assault board game. in this game, you can play as the overlord who controls the Imperial forces or as Rebel heroes. this game has 12 scenarios which take about an hour or two to complete.

During a campaign, the Rebel forces can level up and obtain cool new abilities. Also, the Rebel heroes are awarded credits that can be used to acquire new equipment. Each Rebel hero has an interesting backstory. The heroes include a mercenary, a rogue, a Wookie and of course a Jedi.

The overlord of close is in charge of the Galactic Empire and can upgrade abilities throughout the campaign. There are also boosts and hero characters available to the overlord. A mission can take a drastic turn when Darth Vader appears.

This is a board game steep in lore. The Mage Knight series started as a miniatures game until the lore was revamped and delivered to us as this amazing board game. True to RPG tradition, Mage Knight allows you to customize your characters in so many different ways. The game effortlessly combines RPG elements with deckbuilding to offer a game that will keep you entertained for hours. You can play the game alone or with up to 5 players.

This game offers players more freedom than most RPG board games do. Since there are no rules in stopping you from doing things in a certain way, you can play the game your way. Since players are not forced into set alliances, you can attack other players if you find it advantageous.

Players will level up easily and quickly in the early stages allowing you to get into the fun swiftly. However reaching higher levels requires drastically more XP, ensuring that some players don’t get too powerful. 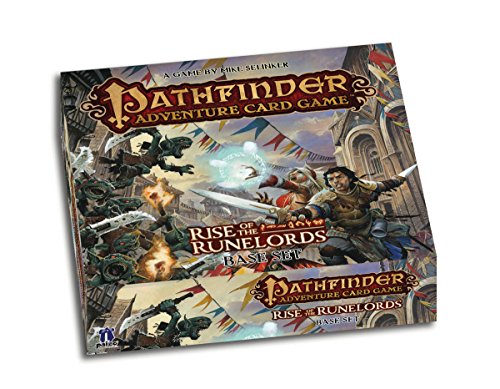 This RPG card game is rich in storytelling, characters are highly customizable, and the hundreds of game cards ensure each playthrough offers something new.

The story progresses through text presented on the scenario cards which also depends on the scenario boss. The biggest selling point of this game is its character development and progression. At the start of the game, you choose a character. After completing scenarios, you gain various rewards. Acquiring particular skills, equipment and power which enhances the character. This ensures the character is more adept in future battles.

Players can choose a character from 7 different classes. The game features 500 cards that detail the attributes, skills, and enemies. Five polyhedral dice are used to determine turns.

Pathfinder is the perfect game for anyone who wants a relaxed fantasy role play. This card game is built on great storytelling mechanisms, character customization, and teamwork.

Here are some factors to consider before investing in an RPG board game.

There are several types of RPG board games. The two most popular types are combat games and strategy games. Games, such as Star Wars: Imperial Assault, is based more on combat since there are two factions pitted against each other.

Most games on the list can be played within 1 to 3 hour times. However, the campaigns can last for countless hours. Games such as Gloomhaven have campaigns that take over 100 hours to complete.

Every player appreciates detailed and beautifully designed game components. Games such as Star Wars: Imperial Assault has miniatures as detailed and as beautiful as any limited edition Star Wars figure. This goes a long way to enhance gameplay.

Best RPG Board Games – Wrap Up

Whether you are an avid gamer or a casual gamer, a good RPG board game is a great way to pass time. Some games require several players while others can be played alone.

My top pick is Gloomhaven. This game features detailed content and it’s great to play as a team. The game is highly replayable so don’t expect to be bored with it anytime soon.

For Star Wars fans (which is every single one of us), I recommend the Star Wars: Imperial Assault. This game fits perfectly into the Star Wars universe. With expansion packs, you can get to meet and play as popular Star Wars characters such as Han Solo, Boba Fett, and Darth Vader (comes with the base game).

For hardcore RPG gamers, I recommend Mage Knight: Ultimate Edition.  You are guaranteed to be sucked deep into the fantasy world created and won’t want to learn. It is also challenging and requires a lot of strategies. However, the rules are easy to follow and understand.